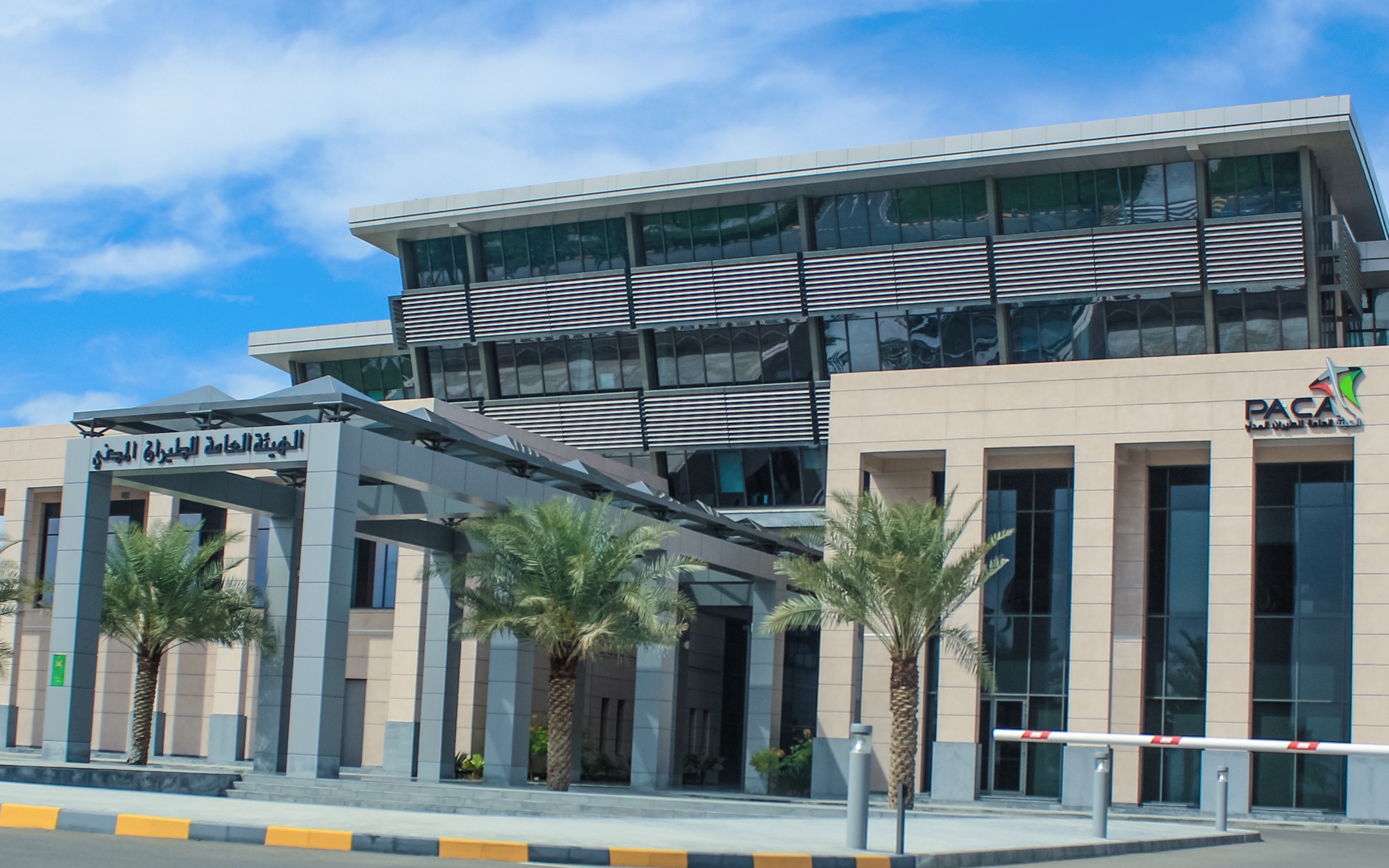 His Majesty Sultan Qaboos bin Said has the vision for the Authority to have and financial and administrative independence under Royal Decree No. (33/2012) issued on May 26, 2012 and its regulations issued by Royal Decree (43/2012), which was confirmed by Royal Decree No. )76/2019( on the promulgation of the Civil Aviation Law, the Authority continues to work since its inception to enable the civil aviation sector in the Sultanate to demonstrate its essential and vital role in achieving sustainable development along with all other sectors that are experiencing a boom and rapid growth. Today, the Sultanate has become a strong competitor at the regional and global level in all aspects of aviation security and safety, environmental protection and infrastructure of the civil aviation sector, meteorological and air navigation services.

On this glorious occasion, His Excellency Dr. Muhammad bin Nasser Al-Zaabi -President of the Civil Aviation Authority  expressed his pride in the great and successive achievements in the field of civil aviation in the Sultanate, culminated recently by the issuance of the Civil Aviation Law in accordance with Royal Decree No. (76/2019) Stressing the interest that the sector enjoys in the light of the wise leadership of His Majesty His Majesty Sultan Qaboos bin Said - may God protect and preserve him - as the decree stressed the responsibilities and tasks of the authority and important rules in organizing aviation, airport operation, air navigation services, meteorology and environmental protection Which, in turn, ensures that the regulatory process is carried out with precision and professionalism to achieve the desired goal towards achieving global leadership in the civil aviation industry.

He also expressed his pleasure, saying, "On behalf of all colleagues of the Civil Aviation Authority , it is an honor for me to send my highest congratulations and blessings to the high place, the builder, the modern Oman renaissance, His Majesty Sultan Qaboos bin Said, may God protect him and his pastors - and to the proud Omani people on the occasion of the forty-ninth National Day. This occasion, with which the loyalty and gratitude of the Leader renews our prosperous path to what has been accomplished and given to this dear homeland, and the achievements of the civil aviation sector emphasize the lofty vision of the future of this promising vital sector, and this is evident through what the Sultanate has acquired from the position of AD Global prestige and with the testimony of organizations, and the great cooperation between all the authority’s partners from the governmental and private sectors had the prominent role in achieving the desired goal.

In the course of the clear achievements of the aviation sector, the authority got a letter of appreciation and appreciation from the International Civil Aviation Organization (ICAO) for its distinguished role and efforts in dealing with emergency situations, within the plans studied in accordance with the international standards set by the organization. This praise came after the success of the emergency plans and the effective measures taken by the authority during the closure of the Afghan and Pakistani airspace at the level of the Middle East and Pacific regions, where the authority managed to deal directly at the event to plan the use of new emergency paths and measures in a timely manner with effective cooperation and coordination.

It was also mentioned in the praise that the Sultanate of Oman represented a bridge connecting air traffic between Europe and Asia and the Pacific, and the authority contributed in its role in maintaining the continuity of air traffic across the Middle East region to and from the Asia and Pacific regions, and maintaining the safe flow of the redirected air traffic around the area affected by the closure , Compliance with standard procedures for notification and working procedures for Regional Emergency Coordination Teams (CCTs), as well as their continued support for the activities of the Organization (ICAO).

In the context of raising the readiness for emergencies, the Authority has recently supervised the emergency exercise (Dolphin), which simulated the experience of the crash of a civilian plane off the beach of Azaiba - Airport, which was carried out by Oman Airports in cooperation with many concerned parties. This exercise is to measure how quickly the event responds and handle all variables.

The Commission also received a letter of praise from the World Meteorological Organization (WMO) for its professional handling of the exceptional atmospheres resulting from tropical cyclones. The Arabian Sea witnessed for the first time in one year the formation of four tropical cyclones, which varied in their impact on the atmosphere and coasts of the Sultanate directly and indirectly. Through the National Center for Early Warning of Multiple Risks, the Authority succeeded in monitoring and anticipating its different paths and impacts and issuing the necessary data and warnings to avoid or minimize its risks.

His Excellency pointed out that the wise government led by His Majesty Sultan Qaboos bin Said is seeking to increase the necessary investments in civil aviation development and management projects in line with best practices. He added that the steady growth in the number of passengers at the Sultanate's airports has been estimated at 15% over the last five years. The Sultanate has achieved a major leap in the rankings of Muscat International Airport and Salalah, making it one of the best advanced airports in the world.

This year also saw the inauguration of Duqm Airport, one of the most important achievements of the aviation sector in the Sultanate. It is also a qualitative addition to the civil aviation sector, which will undoubtedly significantly enhance the system of the sector because of its potential opens up prospects through its ability to accommodate the growing growth of the number of passengers coming and leaving the promising economic zone.

The civil aviation sector represents an important and indispensable source in the comprehensive development of all countries in order to promote civilized and social communication among the peoples of the world. In the field of air transport, the Sultanate continues to conclude many bilateral agreements and memorandums of understanding to promote flights to and from the Sultanate. Moreover, it has come a long way in a series of negotiations with the European Union, which began during the first quarter of this year to enter into a comprehensive agreement between them on the one hand and all EU countries on the other, without the need to negotiate with each European country separately. Instead of bilateral air transport agreements with European countries, this would open up broader prospects for investment and economic opportunities through the flexibility of air transport.

The Sultanate continues to support and host many regional and global activities and programs, and to intensify efforts towards the realization of ICAO initiatives of achieving the highest standards of application of the agreed principles. At the regional level, the Sultanate hosted this year a joint search and rescue workshop between the offices of the International Civil Aviation Organization (ICAO) for the regions of Africa, Asia, the Indian Ocean and the Middle East in Salalah during the period 26-29 August 2019. It was attended by more than 20 countries with 100 experts and specialists representing different fields of civil, military, maritime and aviation authorities. The workshop confirmed the pivotal role played by the Sultanate of Oman at all levels of aviation locally, regionally and globally.

At the local level, the Commission hosted the eleventh meeting of the Standing Committee for Meteorology and Climate in the GCC countries in Salalah during the period 27-28 August 2019. In the presence of all Permanent Representatives of the World Meteorological Organization and heads of meteorological facilities in the Member States, this meeting came to discuss the Council's decisions in order to enhance the process of joint Gulf action and volunteerism and the strategic plan in the field of meteorology and climate. It also highlights the draft unified meteorological law for the GCC States, and the services provided by meteorology for air navigation.

In addition, the Commission hosted two consecutive events as part of a project carried out by UNESCO's Intergovernmental Oceanographic Commission (IOC) 'Conference on Strengthening Tsunami Early Warning Systems in the Northwest Indian Ocean through Regional Cooperation' (1st - 02 September 2019). To discuss national tsunami early warning strategies and community preparedness for a near-source tsunami. Experts from the region will meet in the period (03 - 06 September 2019) to develop a joint regional cooperation strategy that supports tsunami preparedness efforts for the countries of the region.

As part of a series of projects to develop the infrastructure of the civil aviation sector from the return on investment, the seventh air sector was inaugurated and improvements were introduced in Oman's airspace and the telecommunications network supporting existing and new sectors. This project resulted in the division of the southern region which represents the largest sector in the Omani airspace into two sectors: the middle sector and the new southern sector. They are activated at peak times and according to air traffic management requirements in other and exceptional cases. In addition, improvements have been made in the Middle East sector by reducing the size of the sector to improve air traffic management and thus further reducing air traffic pressure on air traffic controllers during air traffic management in the sector.

The project also included the launch of new telecommunications frequencies and the expansion of coverage to provide additional options and increase the efficiency and safety of Omani airspace. The Authority continues to implement the contingency plan at the Muscat Air Traffic Control Center, reorganize air traffic routes and add a new air route to deal with the exceptional intensity of aircraft traffic crossing Omani airspace.

Believing in the importance of continuous development of its roles in advancing the civil aviation sector in the Sultanate and keeping pace with the scientific and global development in the aspects of business administration in various sectors, desiring to improve the level of services provided in line with international requirements and standards, and in line with the vision and mission of the Authority and its strategic objectives, especially with regard to the improvement and continuous improvement of the services provided, In mid-September, the TRA launched a project to implement the quality management system with some of its divisions, and lasts for one year in which the International Quality Management Certificate (ISO 9001-2015) is obtained. In addition to similar certificates in the aspects of information security (ISO 27001) and calibration of devices (ISO17001) Directorate General of Meteorology.

In addition, the Authority adopted the application of the document management system in cooperation with the National Documents and Archives Authority. The preparation of the system is in accordance with the principles and procedures contained in the Documents and Archives Law and its executive regulations and based on the disclosure conducted by the working group on the types of files and documents circulating in the Authority.

In conclusion, His Excellency Dr. Muhammad bin Nasser Al-Zaabi -President of the Civil Aviation Authority  (CAA) appreciated the interest of the Sultanate's civil aviation sector from the wise government led by His Majesty Sultan Qaboos bin Said. The vital role of this sector in the organization of civil aviation in general and reduce the risk of weather, pointing to the prominent role of its national cadres who have dedicated in their tireless work in all sincerity and effort to raise this precious home.