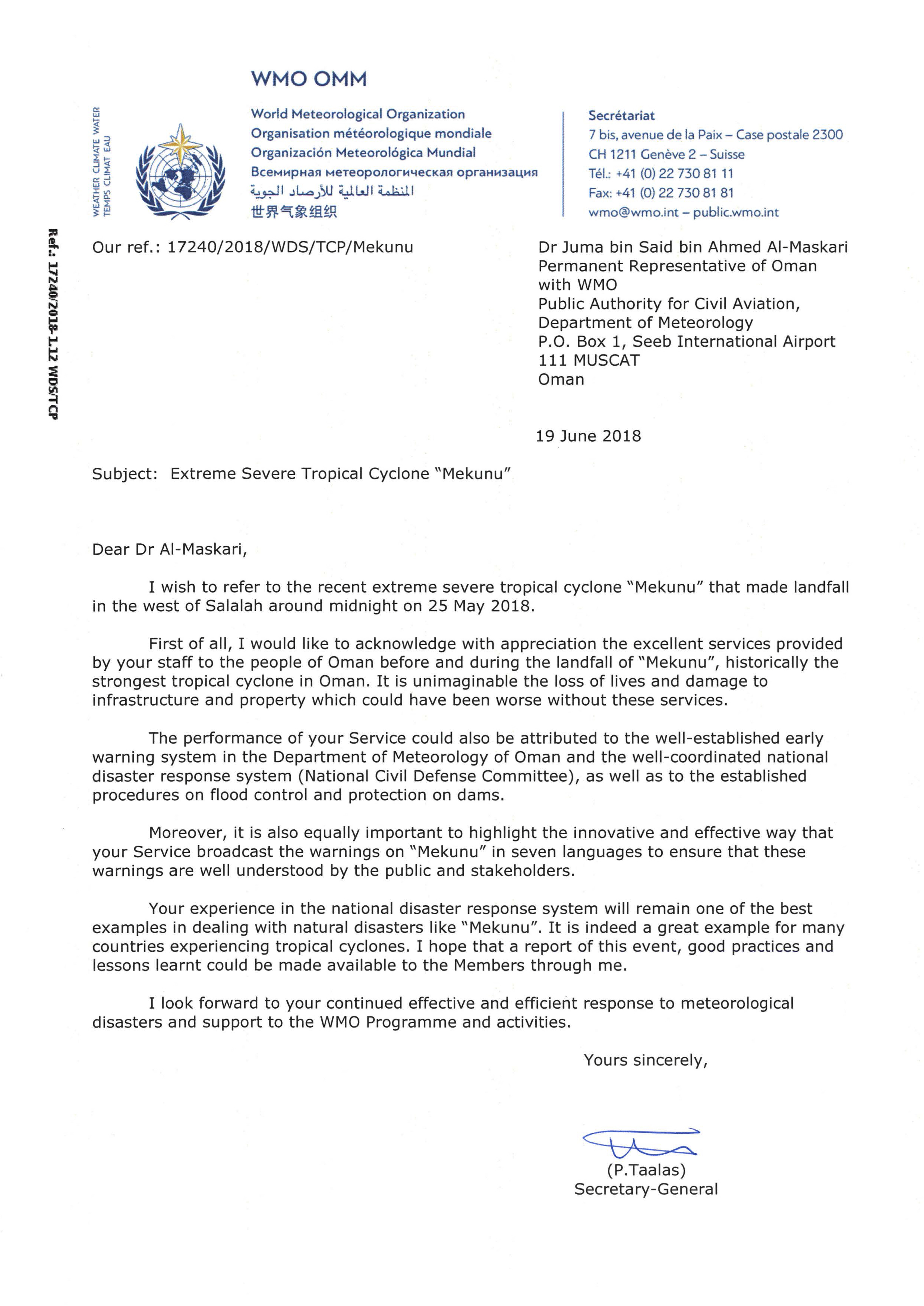 The Public Authority for Civil Aviation (PACA) received a letter of appreciation from the World Meteorological Organization (WMO) for the distinctive role of the Sultanate in dealing with the exceptional weather conditions to mitigate its effects within well thought out plans to handle the emergency situations in accordance with international standards.
This recent tribute came after the Sultanate was affected by Tropical Cyclone "Mekunu" recently in May 2018. His Excellency P.Taalas, Secretary-General of the World Meteorological Organization (WMO), addressed in the letter the distinguished experience of the Sultanate through the integrated system, which worked well in cooperation and harmony between all parties with different roles, as well as transmitting alerts, warnings and the latest update on the Tropical System with transparency and clarity. He pointed out that this experience will remain one of the best examples for many countries exposed to Tropical Cyclones as well as to policy and decision makers in this regard. The letter also praised the role played by the PACA through the activation of emergency plans at the National Multi-Hazard Early Warning System (NMHEWS) with high efficiency and well-coordination with the Oman National Emergency Management Centres and the sectors of the National Civil Defence Committee in the Sultanate. It is worth mentioning that the World Meteorological Organization (WMO) has 191-member states and territories and the Sultanate has joined its membership in 1975.
The organization also praised the efficiency of PACA's media while the exceptional weather, which was reflected in the smooth flow of accurate information, the nowcasting and awareness guidelines in seven different languages: German, French, Hindi, Bengali and Urdu, as well as Arabic and English languages to ensure that the information reaches the largest segment of the society for the safety of citizens and residents in the Sultanate.

On this occasion, HE Dr. Mohammed bin Nasser Al Zaabi, the CEO of PACA, said that this tribute was a testimony to was reached by the Sultanate’s under the wise leadership of His Majesty Sultan Qaboos bin Said, in regard to the progress and development in dealing with climate change and exceptional weather conditions through the national cadres in the field of meteorology besides the integrated infrastructure and advanced technical equipment. As well as, the accuracy of drawing emergency plans and their activation in accordance with international standards. He added that the nationally integrated system in the Sultanate, which operates under one umbrella, " National Committee for Civil Defence", has played a large and effective role in dealing with the tropical situation and in a professional manner in order to limit its further impacts.
His Excellency praised the role of the (NMHEWS) in careful followed-up to the details of the developments of this exceptional weather condition and its potential impacts on the Sultanate from the first moment in coordination with PACA’s Office in Dhofar Governorate.
He also expressed his thanks for the extraordinary efforts of the Directorate General of Civil Aviation Regulation and the Directorate General of Air Navigation through rapid response with contingencies and the application of best international procedures in accordance with local and international regulations and laws of ICAO to avoid potential impacts and ensure the safety of air traffic. He also praised the distinguished role of PACA's media department, which was also a source of international acclaim for its role in spreading awareness and warnings, continuous updates in different languages, and continuous coordination with various media institutions.
In conclusion, HE appreciated the precious confidence that PACA and its national cadres have received from His Majesty Wisdom government and from various sectors of society. Thanking Allah, the Almighty for his endless kindness, care, and supports. He called upon Allah the Almighty to preserve this country safe and reassuring and to grant His Majesty Sultan Qaboos bin Said the long life and perpetuate blessings of the well-being of health and wellness.